Gender scholars have long criticized the fashion media for glorifying emaciation and contributing to body-image and eating problems. However, they have been relatively quiet about how medical science and news reporting may contribute to the very same problems. This is surprising given a long tradition of feminist critiques of medical authority in other areas. What’s Wrong with Fat? fills this gap by examining how medical research, public health campaigns, and news reports contribute to a “cult of thinness.”

Indeed, the United States, we are told, is facing an obesity epidemic – a “battle of the bulge” of not just national, but global proportions – that requires drastic and immediate action. Experts in the media, medical science, and government alike are scrambling to find answers. What or who is responsible for this crisis, and what can we do to stop it?

In What’s Wrong with Fat?, I argue that these fraught and frantic debates obscure a more important question: How has fatness come to be understood as a public health crisis at all? Why has the view of bigger bodies as a problem – a symptom of immorality, a medical pathology, a public health epidemic – come to dominate more positive framings of such bodies – as consistent with health, beauty, or subject to unfair discrimination? Why are heavy individuals – who are disproportionately poor and people of color – singled out for blame? What are the consequences of understanding weight in these ways and how do they vary by gender, race, and class?

In What’s Wrong with Fat?, I present several of the various ways in which heavy bodies are understood – or framed – in America today, examining the implications of understanding fatness as a health risk, disease, and epidemic, and revealing why we’ve come to understand the issue in these terms, despite considerable scientific uncertainty and debate. I show how debates over the relationship between body size and health risk take place within a larger, though often invisible, contest over whether we should understand fatness as obesity at all. Moreover, I show how public discussions of the “obesity crisis” do more harm than good, justifying and reinforcing inequality based on race, gender, class, and leading to weight-based discrimination and bullying, as well as medical misdiagnoses.

I use the concept of framing to shed new light on contemporary debates over body size. In the introduction, I promise: “Once you put down this book, you will never hear the word obesity the same way again.” That is because I show that the term obesity implies a medical frame, in which fat bodies are seen as inherently pathological, and increasingly a public health crisis frame, in which increased body sizes at the population level are viewed as a public health crisis. These medical and public health messages reinforce a cult of thinness that is also propagated by the fashion media and which falls heaviest on women. These medical and public health frames are all the more invidious in that most people do not see them as such, nor realize that there are alternative ways of understanding fatness, as, for instance, beautiful, sexy, healthy, or a positive form of human diversity.

In an illustration that I commissioned for this book, I use the metaphor of an opera and opera glasses to convey this point. From the balcony, three figures view an opera, entitled “l’Epidemia di Obesita (the Obesity Epidemic)” through opera glasses that provide a metaphor for different ways of framing the “obesity epidemic.” These include: (1) personal responsibility, (2) societal factors, and (3) biology. Each distinct lens leads to a different interpretation of the story line. For the man with the personal responsibility opera glasses, it is a “timeless story of desire, transgression, and its inevitable consequences.” For the man with the “society” glasses, it is “a wrenching portrait of poverty and ignorance,” and the woman with the biology lenses sees “the tragic saga of a fragile soul inured in a prison of flesh.” 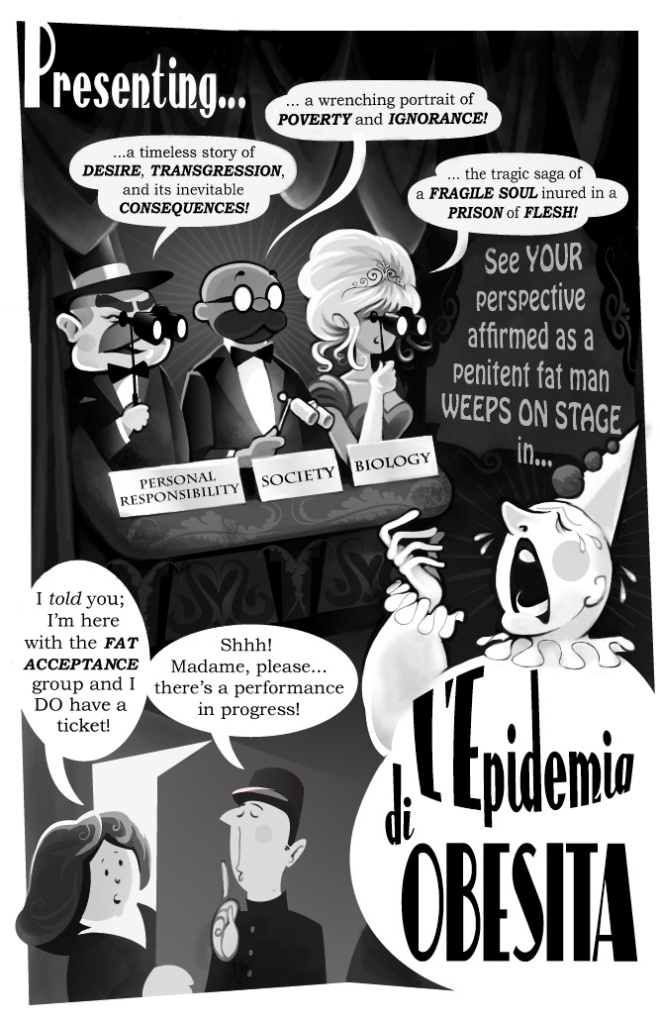 These distinct “blame frames” shape the remedies that seem justified and desirable. For instance, the personal responsibility frame makes plausible the idea that there should be more restrictions placed on the use of food stamps or that heavier people should be charged more for health insurance as a way of punishing unhealthy lifestyles. A sociocultural frame emphasizes how forces including the food industry, poverty, and cultural practices also contribute to higher populations weights. A biology frame stresses that body size is largely controlled by biological factors beyond personal control. Based on content analysis of hundreds of news reports, I find that the personal responsibility frame has dominated U.S. public discourse, but that socio-cultural explanations are gaining ground.

Returning back to the opera, however, while each of these figures sees the opera via different “blame frames,” all take for granted the “problem frame,” of obesity as public health crisis. Indeed, this is imposed by the opera itself. Meanwhile, on the bottom left, we see an usher (a literal gatekeeper) telling a woman from a fat acceptance group, who is trying to enter the opera, to be quiet. However, she – and the perspective she represents –literally cannot get in the door. This provides a metaphor for how difficult it can be to reframe discussions of bigger bodies as medical and public health problems into discussions of weight-based discrimination and bias and to seriously consider scientific evidence that it is possible to be heavy and healthy.

Abigail C. Saguy is associate professor in sociology at the University of California, Los Angeles. Here book, What’s Wrong with Fat?, was reviewed in the April 2014 issue of Gender & Society. To read the review click here.

8 thoughts on “What (if anything) is Wrong with Fat?”