Stay-at-Home fathers and their counterparts, “breadwinner” mothers, are a hot topic, in part because growing numbers of parents in these roles provide circumstantial evidence of greater gender egalitarianism. Furthermore, growth in both of these groups points to changes in an area of family life—who has primary caregiving versus primary earning responsibility—that many prominent scholars and public commentators have highlighted as a pressure point in a stalled gender revolution. Yet, the question remains. How much do stay-at-home fathers and breadwinner mothers matter in reshaping our ideals for gender equality in work and family life?

I think they may matter a lot, and here’s why. As a recent New York Time’s article points out, some stay-at-home fathers are embracing the role by actively focusing on their children’s development and swapping recipes: all activities that counteract the stereotype of the bumbling, incompetent father who wouldn’t know lentil from pea soup. And, at least some men are forming and participating in national networks aimed at connecting and supporting at-home fatherhood, as the New York Times article highlights. Local networks are also becoming more prominent. MilwaukeeDads.com is a local organization of stay-at-home fathers that has similar goals to these national organizations in my hometown of Milwaukee, Wisconsin. The point is that some of these fathers are not just attempting to change their own lives; they are trying to build networks and institutions that may support similar changes for other men, via things like information-sharing and support for men who want to implement new forms of fatherhood. These developments, and increasing and consistent coverage of new models of fatherhood in the media, like the New York Times article, along with the media presence of work-family scholar-activists like Scott Behson, have the potential to encourage cultural shifts that bend towards greater choice in work/family arrangements for both women and men. 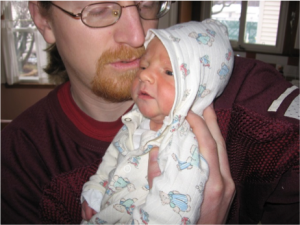 I don’t mean to overstate the case. There is no question that the numbers of men who are fully embracing at-home fatherhood (and their counterparts, breadwinner wives) are very small. Indeed, work by Karen Kramer and her colleagues shows that while we have seen growth in the number of stay-at-home father/breadwinner mother households from 2.2% in the 1970s to 4.4% in the 2000s, in absolute terms this isn’t a lot of couples. However, Kramer’s research also shows that one thing that has been trending upward are the reasons that fathers in these families give for being home. Historically, many men who were unemployed reported that they were “at home” because they couldn’t find a job or because they were unable to work, often because of health or disability issues. Today, growing numbers of unemployed “at-home” fathers report that they are primarily home to care for their families.

As my colleague Brad Harrington says, we are likely in a period of transition, and whether more at-home dads or breadwinner moms will help un-stall the gender revolution is still up for debate. Plenty of institutional and cultural factors pull men out of full-time fatherhood and push women out of the sort of employment necessary to support an at-home parent. There is also evidence of gender entrenchment, particularly around beliefs that mothers are the best nurturers and in who continues to do most of the housework. Some of my own research with Sarah Flood documents that at-home and breadwinner mothers do similar amounts of housework, and at-home mothers do more of it than at-home fathers.

Even so, I think there are reasons for optimism. My research investigating the experiences of both at-home fathers and their employed “breadwinner” wives suggests that, even when not actively chosen (as was the case for many families during the Great Recession), the experience of primary caregiving for men or primary earning for women has the potential to promote shared understandings within heterosexual couples that favor greater gender egalitarianism. Some of the stay-at-home fathers I have interviewed about their experiences have been surprised by the level of fulfillment and joy they take from developing much deeper and consistent relationships with their children. Fathers often come to value their caregiving experiences and mothers are better positioned to lean in to their jobs and careers. Indeed, for some men who return to paid employment, their beliefs about how best to combine work and family life shift in ways that favor more consistent involvement in their families. The broader understanding of work and family life that gender-atypical experiences promote are exactly the kinds of experiences that can produce the identity and attitudinal shifts we need to encourage continued movement towards a greater range of life options for everyone. The more men and women that take on gender-atypical work-family roles now, the better chance we have of normalizing more work-family options for future generations.

Noelle Chesley is associate professor and director of undergraduate studies of sociology at the University of Wisconsin-Milwaukee.