By Philip Cohen. Originally posted at Family Inequality (here). The piece is cross-posted with permission.

Four years ago I wrote about the gender composition of sociology and the internal segregation of the discipline. Not much has changed, at least on the old measures. Here’s an update including some new measures (with some passages copied from the old post).

People may (or may not) want to be sociologists, they may or may not be accepted to graduate schools, thrive there (with good mentoring or bad), freely choose specializations, complete PhDs, publish, get jobs, rise to positions of leadership, and so on.  As in workplaces, gender segregation in academic sociology represents the cumulative intentions and actions of people in different institutional settings and social locations. It’s also the outcome of gender politics and power struggles. So, very interesting!

A report from the research folks at the American Sociological Association (ASA) got me thinking about this in 2011. The conversation revived the other day when someone asked ASA Vice President Elect Barbara Risman (a friend and colleague of mine), “What do you make of the fact that increasingly the majority of ASA election candidates tend to be women?” As we’ll see, the premise may be wrong, but the gender dynamics of ASA are interesting anyway.

The last four people elected president of ASA have been women (Ruth Milkman, Paula England, Annette Lareau, and Cecilia Ridgeway), and the the next winner will be either Michele Lamont or Min Zhou, both women. That’s an unprecedented run for women, and the greatest stretch of gender domination since the early 1990s, when men won six times in row. Here is the trend, by decade, starting with the decades before a woman president, 1906 through the 1940s: 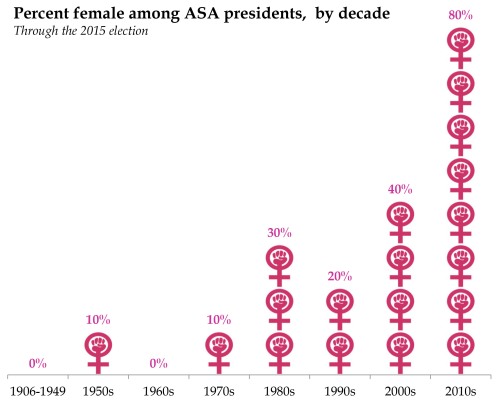 Clearly, women have surpassed parity at the top echelons of the association’s academic leadership. ASA elections are a complicated affair, with candidates nominated by a committee at something like two per position. For president, there are two candidates. In the last nine presidential elections, six have featured a man running against a woman, and the women won four of those contests. So women are more than half the candidates, and they’ve been more likely to win against men. That pattern is general across elected offices since 2007 (as far back as I looked): more than half the candidates are women, but even more women win (most elections have about 36 candidates for various positions):

The nominating committees pick (or convince) more women than men to run, and then the electorate favors the women candidates, for reasons we can’t tell from these data.

These elections are run in an association that became majority female in its membership only in 2005, reaching only 53% female in 2010. That trend is likely to continue as older members retire and the PhD pool continues to shift toward women.

Since the mid-1990s, according to data from the National Science Foundation, women have outnumbered men as new sociology PhDs, and we are now approaching two-thirds female. (The data I used in the old post showed a drop in women after 2007, but with the update, which now comes from here, that’s gone.) 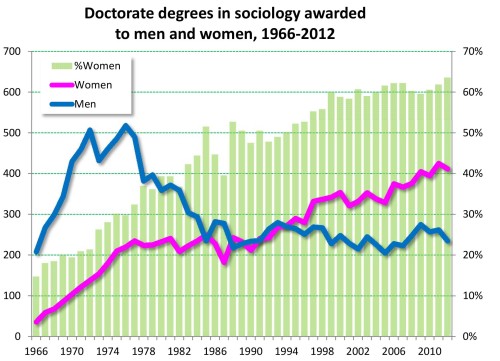 Producing mostly-female PhDs for a quarter of a century is getting to be long enough to start achieving a critical mass of women at the top of the discipline.

These numbers haven’t been updated by ASA since 2010. The pattern of section belonging at that time showed a marked level of gender segregation. On a scale of 1 to 100, I calculate the sections are segregated at a level of .25.

Finally, prestigious academic journals have one or more editors, often some associate editors, and then an editorial board. In sociology, this is mostly the people who are called upon to review articles more often. Because journal publication is a key hurdle for jobs and promotions, these sociologists serve as gatekeepers for the discipline. In return they get some prestige, the occasional reception, and they might be on the way to being an editor themselves someday.

Journal leadership is dragging behind the trends in PhDs, ASA members, and ASA leadership. I selected the top 20 journals in the Sociology category from the Journal Citation Reports (excluding a few misplaced titles), plus Social Problems and Social Forces, because these are considered to be leading journals despite low impact factors. The editors of these journals are 41% female (or 40% if you use journals as the unit of analysis instead of editors). Here is the list in two parts — general journals and specialty journals — with each sorted by impact factor. For multiple editors I either list the gender if they’re all the same, or show the breakdown if they differ: 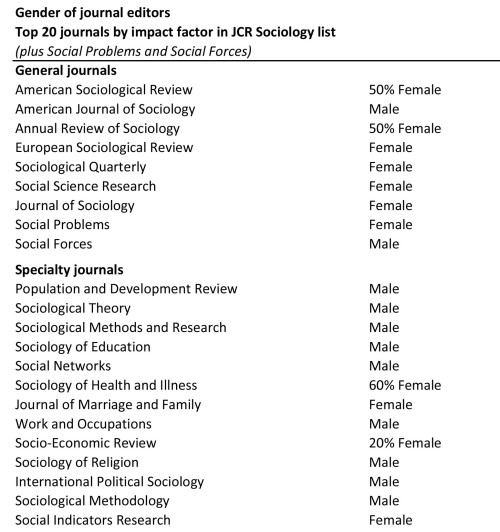 It looks like the gender gap is partly attributable to the difference between journals run by associations and those run as department fiefdoms or by for-profit publishers.

For editorial boards, I didn’t do a systematic review, but I looked at the two leading research journals — American Sociological Review and American Journal of Sociology, as well as two prestigious specialized journals — Sociological Methods and Research, and Gender and Society (which is run by its own association,Sociologists for Women in Society, whose membership includes both women and men). Here’s the update to my 2011 numbers: 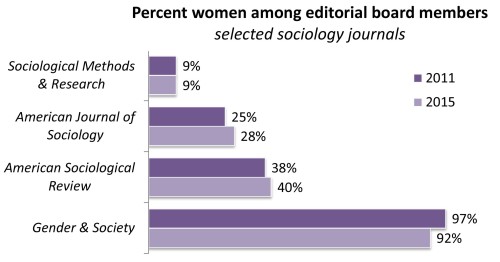 I removed a couple board members I know to have died in the last year, so these lists might not be that up to date.

Note on the journals that SMR and AJS are fiefdoms with no accountability to anyone outside their cliques, so it’s not surprising they are decades behind. ASR and G&S, on the other hand, are run by associations with majority-female memberships and hierarchies, in the case of G&S with a feminist mission. (ASA demands reports on gender and race/ethnicity composition from its editors.) AJS has no excuse and should suffer opprobrium for this. SMR might argue they can’t recruit women for this job (but someone should ask them to at least make this case).