It seems every few weeks or so we have this conversation about Black male athletes who violently abuse their White wives and girlfriends (from Mitch Lee to Corey Batey to OJ Simpson to Lawrence Phillips to Ruben Patterson to Ezekiel Elliott and others), and the fact that they are almost never held accountable, in any meaningful way, for their violent actions.

These are certainly not the first or only cases, but they shine a light on a perplexing phenomenon we have been observing, researching and writing about: the unconditional love of the Black male body – as long as he can throw, run, catch, dunk and score in an athletic contest, entertaining fans and making hundreds of millions of dollars for White coaches, owners and athletic administrators.There seems no better 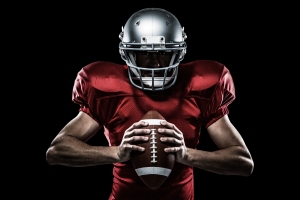 time to have this conversation again than now, on the heels of the recent college football bowl game season and on the eve of the SuperBowl, games that have or may involve athletes who have been accused of acts of violence against women.

During the last days of 2016 and the first days of 2017, several college football teams faced scrutiny for their protection of Black men accused of heinous crimes, including 12 football players at the University of Minnesota who are accused of gang-raping a White woman in October and a player at the University of Oklahoma, Joe Mixon, who is seen on video punching a White woman in the face, leaving her unconscious.

Despite the attention that feminists have paid to violence against women[1], beginning with consciousness raising groups, and continuing in research, teaching, and activism, few feminists have examined male athletes’ violence against women and thus existing research lacks a feminist and intersectional framework with which to analyze it. In our forthcoming book Gender, Power and Violence we address this gap by analyzing the violence athletes perpetrate against women through a lens that examines power and privilege and considers the role that hegemonic constructions of the hypermasculinity of male athletes plays in the high rates of violence against women that they perpetrate. [The book applies this same framework to an analysis of sexual and intimate partner violence perpetrated in four additional institutions that share similar qualities: the military, prisons, fraternities and the Catholic Church].  A central element to understanding the epidemic of athletes perpetrating violence against women is the total lack of accountability, by universities, sports teams, and local law enforcement and courts.

In general, violence against women is rarely taken seriously, regardless of the race of the victim but for one glaring exception: in the case of a Black man accused of the rape of White woman, the criminal justice system not only springs into action, but in the past, vigilantes often took the law into their own hands. For centuries, as is well documented by Angela Davis (1983), Orlando Patterson (1998), and many others, Black men have been lynched, perhaps as many as 50,000, for allegedly violating the gender-sexuality-race intersection, that is; for the accusation, almost always false, of raping a White woman.

Let us be clear: under no circumstances should a Black man, or any man, be illegally lynched for rape or any other act of violence against women.  Nor should Black men be subjected to the kinds of discrimination and mishandling in the criminal justice system that results in what can only be described as modern day lynching: wrongfully convicting the factually innocent, of which the most common case involves a Black man wrongfully convicted for the rape of a White woman (Hattery and Smith 2010). This intersection has a long and very complex history that continues to ruin Black men’s lives even today.

In this historical and contemporary context of the hyper policing of Black male bodies as they intersect with White women’s sexuality—lynchings and exonerations–a special case of unconditional love is reserved for Black male athletes. And, not just by Black people but especially by White men: the coaches, athletic directors, boosters, teammates, sheriffs, judges and fans, all of whom benefit in some way from their performance on fields and courts; they provide entertainment and their performances sell tickets and t-shirts and bobble head dolls. In this context, it’s not at all surprising that athletes who are accused of, caught on tape, and even convicted of abusing White women are defended, by both men and women, they get to keep their jobs, and they continue to be revered; names like Greg Hardy, Jameis Winston, Ray Rice, OJ Simpson and so many others make that case for us.

But what we find intriguing is the extension of that unconditional love when the crime involves the rape of a White woman by a Black male athlete. In cases in which powerful, physically imposing Black men who play football or basketball engage in the same crime Black men were lynched for merely being accused of, White men not only turn a blind eye, but in fact go to great lengths to defend the Black man, by paying for top lawyers, by hiding evidence, and by extolling their right to a second chance, even before being held accountable we might add, as Brent Mussberger did during the broadcast of the 2017 Sugar Bowl as Joe Mixon led his team to victory.

How can we explain this unconditional love in the context of hundreds of years and tens of thousands of lynchings? One explanation could be that the love so many White men (and women) have for famous athletes transcends their sense of justice.  But we argue that it is deeper than that.

Orlando Patterson argued in Rituals of Blood (1998) that the lynching of Black men was in large part a reaction, rooted in fear, that Whites had of Black male bodies and especially their sexuality.Patterson’s lens is useful in analyzing this unconditional love that White men extend to Black male athletes: As long as Black men are segregated to this singular place where Black men are allowed to excel: the athletic field, as Earl Smith argues in Race, Sport and the American Dream, as athletes, not as owners or coaches or anyone with any real power, as long as Black men’s bodies continue to be commodified and their labor extracted for the profit of White men, then they are extended an unconditional love, even when they transgress the sacred space of White women’s sexuality.  In this sense, their expression of power, even when used to abuse White women, is not threatening to White men, it does not threaten White men’s roles as leaders in business, entertainment, politics, the economy or even in SportsWorld.  Nor are the victims ever these White mens’ wives, girlfriends or daughters as the accusers often were in cases of lynching.

In SportsWorld, like nowhere else in America, Black men’s athletic bodies do not to be policed, even when they commit heinous crimes they continue to be worshipped.

[1] Note: we use the term “violence against women” rather than “gender based violence” thanks to the thoughtful debate on the terms provided by Michael Messner, one of the few scholars working at the intersections of feminism, sport and violence, in his 2016 Gender and Society article BAD MEN, GOOD MEN, BYSTANDERS: Who Is the Rapist?

Angela J. Hattery is Professor and Director of Women & Gender Studies at George Mason University. Her research and teaching focuses on social stratification, gender, family, and race. She is the author of ten books including Gender, Power and Violence (2017), Policing the Black Body (2017), African American Families: Myths and Realities (2014) and The Social Dynamics of Family Violence (2012/2016).  Earl Smith, PhD.  Emeritus is Professor of Sociology & Rubin Distinguished and Professor of American Ethnic Studies at Wake Forest University. He is the author of numerous book, research articles and book chapters. Several books are sports related including: Sociology of Sport and Social Theory (2010) and Race, Sport and the American Dream (3rd edition 2014).