Over the past several decades, women have been increasingly successful at integrating into male-dominated professional occupations. However, women’s presence in blue-collar male-dominated jobs continues to be stubbornly low. Why has occupational desegregation been confined to high-level, more lucrative professions? Where are all the female blue-collar workers?

While much attention has been paid to women’s experience in high-status occupations (lawyers, managers), few studies have concentrated on women crossing the gender boundaries of blue-collar trades such as carpentry or mechanics. In 2010, however, an interesting debate on this topic emerged in Gender and Society. In her article “The Gender Revolution: Uneven and Stalled,” Paula England argues that whenever possible, women avoid working in traditionally male blue-collar jobs. She writes that because breaking gender boundaries carries a high social cost, women are willing to enter male-dominated jobs—even if they pay well—only when doing so is the one available path to upward mobility. At the higher levels of the occupational hierarchy, there are fewer, if any, female-dominated professional career paths to pursue. Therefore, women have no choice but to cross gender barriers. This discrepancy explains the desegregation gap between professional and blue-collar fields.

Scholars have already begun contesting England’s theory and proposing alternative explanations for occupational segregation. Barbara Bergman, for example, argues that segregation stems from an employer’s personnel practices rather than from a woman’s personal career choices. Bergman attributes the persistent segregation in blue-collar occupations to a lack of formal education and training opportunities for women entering male-dominated blue-collar trades. This lack of progress contrasts sharply with the expansion of opportunities over the last several decades for women in fields such as law and medicine. Thus, while well-educated women have used their credentials to enter into traditionally male professional occupations, they haven’t been as successful entering blue-collar occupations, where on-the-job training—rather than educational attainment—counts most. Rather than following merit-based rules or objective qualifications, hiring practices in blue-collar male-dominated trades are often entirely at the discretion of an employer or manager. Such practices further exacerbate segregation. Bergman has a solution to combat these discriminatory hiring practices: instituting a formal training system for blue-collar occupations that removes some degree of arbitrariness from the selection process.

In my recent research I look deeper into how individual and structural factors have been impeding women’s entry into low-status male-dominated occupations. Using data from the European Social Survey data (2008-2016), I examine how women’s employment in blue-collar occupations varies in 28 countries that offer different levels of vocational training (VET) to its citizens. I also consider the relevance of parental background (paternal and maternal education level and working status) on the type and sex composition of the occupation in which women and men end up working. There are two main takeaways from my findings.

Fist, VET systems have not been successful integrating male-dominated occupations. Countries with a higher proportion of students enrolled in vocational programs relative to general academic programs do show a greater presence of women in blue-collar trades. However, contrary to Bergman’s expectation, VET does not affect the probability of a woman being employed in traditionally male blue-collar jobs. These findings are most clearly displayed in Figure 1. The graph on the left shows the probability of both men (blue) and women (pink) of being employed in any blue-collar occupation, and the graph on the right shows results for male-dominated blue-collar occupations only. The figure reveals a flat participation rate for women, with variations of less than 1 percent between countries with the lowest and the highest rates of VET enrollment (after controlling for relevant socio-demographic and career-related factors).

Figure 1. Probability of being employed in blue-collar occupations by level of VET enrollment 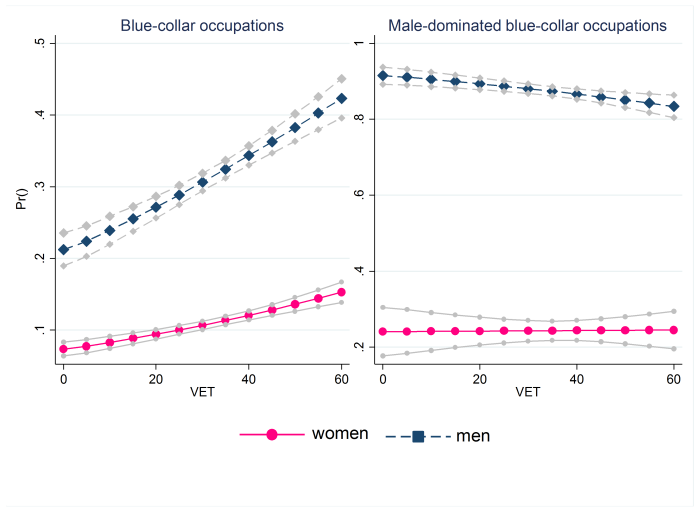 Second, results indicate a high degree of what is known as intergenerational class reproduction within the blue-collar sector. In other words, people whose parents were unemployed, not well educated, or held a blue-collar job are significantly more likely to work in the blue-collar sector than in higher-status occupations. However, women largely remain in gendered careers regardless of their family background, the only exception being if they have a mother in a high-status occupation. As observed in the bottom plot in Figure 2, daughters of high-status women have moved into male occupations with greater frequency. England offers an explanation as to why: traditionally female professions (i.e., teaching, nursing, social work) have been unable to absorb the increasing number of new female college graduates. These women were in effect pushed into male-dominated professions—not to achieve upward mobility but rather to avoid downward class mobility.

Figure 2: Probability of being employed in blue-collar occupations by parental background Overall, the results are in line with recent evidence from various countries showing that VET programs actually segregate women and men even more than the general education system does. Higher education in general, and access to law school, medical school, and other credentialing opportunities, were essential to the considerable progress that women have made in these professional fields. Women seeking access to typically male blue-collar occupations, however, neither benefited from a similar degree of political pressure nor received as much cultural support. Indeed, the findings point to the existence of a societal gendering expectations that contribute to segregation in the blue-collar sector more so than in professional occupations. In part, this could be because traditional gender norms—both at home and the school—tend to be more persistent among the working classes. This upbringing drives men and women to choose gendered career paths.

So what does this all mean for the future of blue-collar segregation? While training programs are important, we should think of them within a broader context of political and cultural changes that promote women’s access to male-dominated blue-collar jobs.

Margarita Torre is an assistant professor in the Department of Social Sciences at the University Carlos II of Madrid. Her current research examines the career dynamics of occupational minorities, workplace inequalities, and the role of gender on social network websites

My Tweets
Join 19,290 other subscribers