Nationalism is on the rise around the world, often accompanied by strong anti-immigrant sentiment and xenophobia toward “those who don’t belong”. Recent examples of this include the increasing level of anti-immigrant rhetoric and policies in the USA, the anti-immigrant public conversation surrounding Brexit, the European migrant crisis, and apparent strengthening of various nationalist movements during the COVID pandemic. Given this globally prevalent apprehension, it is not surprising that migrants are consistently subject to laws and policies that limit their rights and marginalize them within the nation-states that they now call home.

Despite this xenophobic trend, migration into South Korea might be considered an exception to the efforts of nation states to minimize the presence of foreigners living within their boundaries.

In Korea, marriage migrants – mostly foreign women from countries like China, Vietnam, the Philippines, and Thailand – who have come to Korea to marry Korean husbands, have been welcomed.  For the last two decades, they have also been targeted as a key group requiring of integration into the national collective.

In 2008, the Korean government created the ‘Multicultural Families Support Policy’ to support marriage migrants’ settlement and successful integration into the country. The outcome of this policy was the establishment of more than 200 ‘multicultural’ Centers, which offer free programs such as Korea language classes, family counseling, children’s education, and events to promote diversity.

In Korea, this disproportionate ‘positive’ attention given to marriage migrants (in comparison to the far more numerous population of labor migrants) is driven by the public belief that marriage migrants are a potential solution to country’s fertility crises and the aging of the population. Privileging marriage migrants as the solution to this national crisis is paradoxical given that the Korean national culture promotes the country’s monoethnic ‘pure blood’ imagery. Given the concern for ‘pure’ Korean blood, why is the state openly embracing these new arrivals?

My research asks how Koreans and migrants explain and experience these cultural integration centers  “from the ground up”?

To answer this question, I both conducted observations and interviews at two such Centers which link state policy to the daily experiences and interactions of Korean staff and marriage migrants. I illuminate specific examples of how gender relations are directly linked to everyday nationalism, and discuss the implications for social hierarchies in South Korea.

I found that the Korean staff generally welcomed migrants as new members of the nation. This approval, however, was conditioned upon the migrants’ fulfillment of their role as gendered laborers and caregivers for Korean families.  They defended the social support given to migrants for their childbearing, domestic work, caring, and the upkeep of traditional family practices, all of which were seen as the migrants’ invaluable contribution to the nation’s well-being.

Yet, this perspective was based on the Korean staff’s double standard of gender expectations toward Koreans and migrants: the staff believed that Korean women were entitled to a greater level of gender egalitarianism in marriage and independence. Ironically, migrant wives were more likely to engage in wage-earning than their married Korean women, and so more financially independent of families. Nor were Korean women exempt from the familial burdens of the national patriarchy.

My fieldwork confirmed that the idealized migrant woman who spends her time happily caring for her parents-in-law, cooking, educating children, and doing domestic chores, would be unlikely to have the time or freedom to even attend the Centers programs.

Yet, although the migrants were critical about the patriarchal family norm imposed on women in Korea, they appreciated the Centers’ programs such as cooking classes, despite they were designed to reinforce their requirements to be as gendered caregivers.  The migrants reported that learning Korean cultural mores was a  “survival strategy” to navigate their relationships with their husbands’ family. They also actively endorsed helping their children become fluent in Korean language through Centers’ various language development programs. They accepted the primacy afforded to them as the bearers of new Korean citizens and highlighted their value as mothers to “Korean” children. This childrearing labor helped to defend their entitlement to state benefits and justify their position over other migrants. Therefore, instead of resisting the governmental and public conception of their gendered expectations, migrants strategically embraced the logic of “gendered nationalism” to justify their presence in Korea.

My analysis offers two important points about the relationship between gendered immigration and nationalism in Korea.

First, gendered expectations for marriage migrants illustrate how newcomers can be both ‘us’ and ‘them’.  These women are integrated into the state to fulfill roles that Korean women are presumed to have left behind, and yet they are never truly considered Koreans.

Second, the attention given to marriage migrants, but not labor migrants, shows how state policy reproduces gender and social inequality. At least in the case of Korea, I argue that these intersectional forms of inequality sustain both ethnic hierarchies and patriarchal division of labor nationwide.

Sojin Yu is a Postdoctoral Research Scholar at the University of Maryland –College Park, where she is part of the team “Woman’s Empowerment Data for Gender Equality”. Her primary research interests include gender, migration, family, and nationalism. She uses both qualitative and quantitative research methods to understand the social formations of inequality and power.

How do individuals adapt to a changing multicultural society and negotiate the tensions and contradictions of macro-social transition? I pose this question within the context of South Korea (hereafter Korea) and focus attention on emerging, transnationally mobile and religiously conservative young women. The two religious organizations that have allowed me to have an insight into the way women adapt are the World Vision Church (an evangelical Protestant Church) and the Unification Church. Being in the field and talking to people in these churches for seven months meant I could experience how Asian societies are becoming ethnically and culturally more plural. 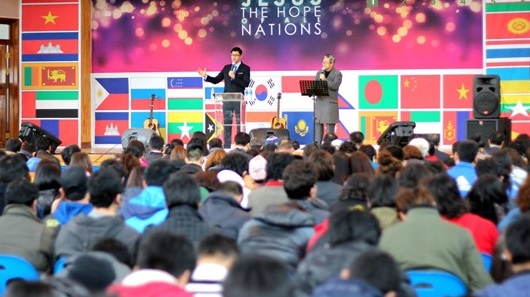 After an official preaching at 12:30 pm at World Vision Church in Seoul, ten new visitors gathered to introduce themselves in a large hall. One Korean woman, Sunhee Yang, had lived in New Jersey for five years and came to the church upon her arrival in Seoul. She had heard about the Vision vice-pastor Kim’s leadership from her church friends in New Jersey. Another woman, Nari, who had worked on Wall Street for more than six years, also visited the church. The stories of Sunhee and Nari exemplify those of many Korean Evangelical Protestant women who have travelled overseas for advanced education or careers. END_OF_DOCUMENT_TOKEN_TO_BE_REPLACED

By Allen Kim and Karen Pyke

In South Korea, a movement has emerged that helps men to answer the fundamental question: What does it mean to be a man and father today? The Father School movement mobilizes fathers to become actively involved in their families. The movement enjoyed rapid growth following the 1997 Asian economic crisis, when many South Korean men lost their jobs overnight. With their breadwinning roles threatened, many fathers began questioning their identities and family roles, leading them to seek answers through participation in the Father School movement. Combining ethnographic observation with content analysis of organization and participant documents, we illustrate how movement leaders and participants glorify American manhood in attempting to forge a new Korean masculinity. END_OF_DOCUMENT_TOKEN_TO_BE_REPLACED