By Mara A. Yerkes

For the past fifteen years, I have studied how men and women combine their paid jobs with care for children. I look at how governments and businesses differ in creating policies that can help people reconcile these responsibilities, and at how men and women differ in the way they work and provide care when they have children. In the past year, research from myself and others took on a new dimension as I experienced the combination of work and care first-hand after becoming a mom in late 2015 and returning to work a few months later.

Flexibility when going back to work

Who works and who cares?

Becoming a working mom also heightened my awareness of gender differences in how men and women share work and childcare tasks after having children. In the US,  nearly two-thirds of mothers with at least one child under the age of 14 work. 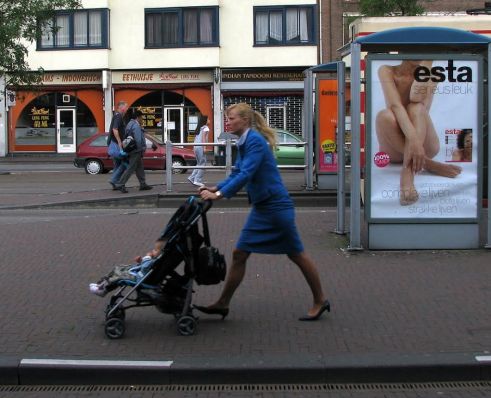 In the Netherlands, where I now live, – nearly three-fourths of mothers are employed. But here, women are much more likely to work part-time than US mothers, particularly after having children. Despite these differences, the US and the Netherlands share a similarly unequal division of care tasks between mothers and fathers. In the US, mothers spent more than twice as much time as fathers providing physical care to children on an average day in 2015. The most recent data for the Netherlands (from 2011) tells the same story. In fact, research on the gender division of care tasks confirms that in most western countries, mothers consistently spend more time caring for children than fathers, and which types of care tasks moms and dads do differs as well.

Why do moms and dads differ in how they care?

So why do moms consistently provide more care than dads? And why do they often spend more time doing more tasks than fathers? In another Australian study, my colleagues and I investigated how couples negotiate who does which care tasks after having a baby and how they explain these choices. Even in couples where dads take an active role in caring for their child, key differences exist in the type of care tasks that parents perform. Our study shows that fathers often opt out of care tasks they perceive as difficult, such as comforting a very upset baby or night care. Moms and dads rationalize these differences by talking about mother’s superiority in caring for and nurturing infants, for example. Mothers’ willingness to step in and do care tasks when fathers step back supports and reproduces these gendered differences.

The need for better work-care policies

Such gender inequalities are persistent and difficult to address. On the one hand, such inequalities can reflect personal work and care preferences of mothers and fathers, as well as differing country contexts. For example, I feel lucky to live in a country where it’s possible for my to each spend at least one day a week caring for our son. Living in the Netherlands, our jobs are flexible enough to make this possible. On the other hand, gender inequalities in work and care reflect structural problems, such as unequal access to time off from work to care for children or unequal access to childcare alternatives, such as formal care. Unequal access to paid leave following the birth of a child helps to establish gender unequal divisions of care that persist long-term. If I have learned one thing by becoming a working mom, it’s that fathers can and do play a crucial role in caring for their children. Providing fathers with opportunities to care is not only essential for children’s development, it is key to improving gender inequality in care and paid work. Hence work-care policies that provide fathers with such opportunities are crucial to achieving greater gender equality in work and care.

Mara A. Yerkes is Assistant Professor in Interdisciplinary Social Science at Utrecht University and Honorary Senior Research Fellow at the Institute for Social Science Research (ISSR), University of Queensland. Her research interests include work, care and family, the sociology of gender and sexuality, comparative welfare states, industrial relations, social inequality and women’s employment. She is the author of Transforming the Dutch Welfare State: Social Risks and Corporatist Reform (2011; Policy Press) and co-editor of The Transformation of Solidarity. Changing Risks and the Future of the Welfare State (2011; Amsterdam University Press). Yerkes is also the author of multiple articles, including the recent article on mothers’ perceptions of justice and fairness in paid work ] and an article on attitudes towards the social and civil rights of diverse families.  She is also an editorial board member for Gender & Society.

One thought on “Gender Differences in Working and Caring? A New Mom’s Perspective”

My Tweets
Join 19,536 other followers