Earlier this year, a closed Facebook group called “Marines United” was revealed to be a place where 30,000 military men shared nude photos of servicewomen without their consent. Sound familiar? This incident is only the most recent in a long string of military sexual abuse scandals (the Air Force, Army, and the Navy have also been implicated in the negative treatment of servicewomen). Over the years, many policy recommendations have been developed on how the military as an organization should address these issues. However, my research shows that it is also important to recognize the role of individuals who interpret, carry out, and implement organizational rules, policies, and regulations.

The culture of the U.S military promotes an aggressive, warrior identity and its command structure reflects standards of white, hetero-normative masculinity. White men comprise the vast majority of officer positions. Within the military hierarchy, service-members who are in positions of power are tasked with interpreting and implementing various rules, often based on their own discretion. This power and authority can be manipulated and exploited to cause harm.

While nearly all of the 33 servicewomen I interviewed for my study experienced some form of sexual harassment, many of their accounts focus on the bureaucratic dimension of their harassment: the precise ways that servicemen (commanders or peers) implemented rules and procedures in order to disrupt their ability to engage in the military workforce and damage their military careers. 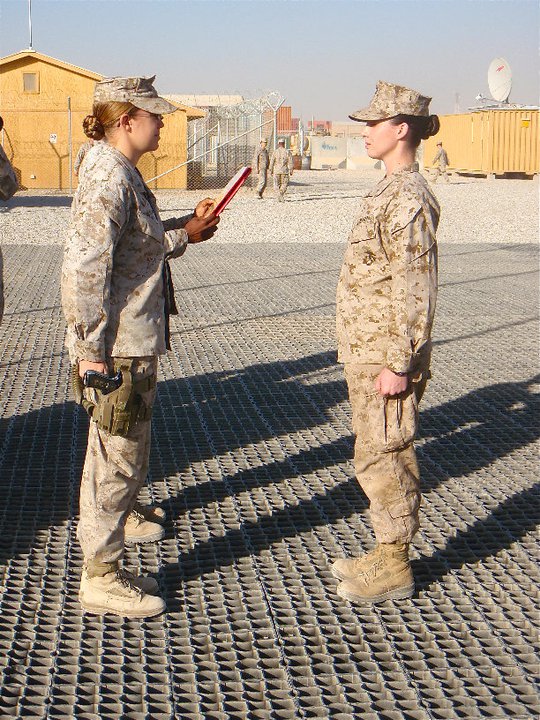 For example, a white enlisted Marine recounted her attempt to report an instance of sexual harassment she experienced. She was told by her commander that, if forced to investigate, they would cancel her Christmas leave. She said, “It was clear that this was a threat. I was asked, ‘Do [you] really want to ruin this man’s career? If we have to go forward, we will have to cancel your leave.’” After suffering sexual harassment, she grew so anxious at the thought of not being able to go home that she dropped the report.

In another case, a Latina Captain in the Army recalled how a fellow Captain tried to undermine a decision she made regarding one of her soldiers. She says “So, my senior enlisted guy requested leave, I approve it….so, I forward it to the Captain [who tracks personnel happenings in the unit] and this motherfucker denied it. He has no authority to do that. So, I fight him on it, fight for my enlisted guy’s leave. So, he turns around and gives me a “counseling statement.” It said I was disrespecting a superior officer. He is the same rank as me … And he says my attitude is detrimental to unit morale and he has no other option but to recommend a dishonorable discharge.” This same captain repeatedly issued administrative sanctions for small and non-existent “infractions” to try to portray her as poor service-member to their commander.

These are two examples of “bureaucratic harassment,” a concept I identify as a specific sub-type of workplace harassment where bureaucracy is both the tool that perpetrators use to harass, as well as their source of power over others in the organization. By threatening to take away earned leave, the enlisted Marine’s commander manipulated his power to grant leave in order to restrict her from reporting sexual harassment. By building a paper trail of petty infractions and complaints, the Army officer’s colleague attempted to exploit his social power (as a white male over a Latina) through the bureaucratic system.

Organizational features such as high levels of discretion in approving leave and promotions, assigning daily work activities, and conducting employee evaluations allow for individuals to cause harm through official administrative channels. Many servicewomen perceive this treatment as legitimate since it occurs through official military organizational channels. They do not report it, they spend a lot of time responding to and fighting infractions levied against them because of it, and often they end up leaving the military as a result of it. Servicewomen who are prevented from reporting experiences with sexual abuse may be forced to stay in a unit with the perpetrator. Having a negative record of service can prevent servicewomen from accessing promotions and opportunities and can result in lost post-service medical and educational benefits. By identifying the unique tactics that servicemen use to harass through bureaucratic systems, the organizational features that facilitate bureaucratic harassment, and the unique forms of harm it causes to servicewomen, my research aims to make these processes visible so that they can be recognized and prevented in the future.

Stephanie Bonnes is a PhD candidate in Sociology at the University of Colorado, Boulder. Her research broadly focuses on gender and race at the intersections of victimization, inequality, crime, and organizations. Her dissertation explores the experiences of women in the United States Military including, but not limited to, servicewomen’s experiences with sexual abuse.