Revolutions tend to stop at the threshold of the private household, doing little to liberate women from domestic inequality. Even the “gender revolution” of women’s increased access to employment, education and birth control in countries such as the US since the 1960s is generally viewed by scholars as “stalled” (http://journals.sagepub.com/doi/pdf/10.1177/0891243210361475). Along with continued inequality in employment, a key item of unfinished business is domestic inequity, with women continuing to perform the lion’s share of domestic and caring labor despite their mass entry into paid work (http://journals.sagepub.com/doi/pdf/10.1177/000312240406900601). How does such stalling occur? Here I examine the iconic case of the Russian revolution of 1917 and its aftermath.

Women’s liberation from what the Russian revolutionary leader, Vladimir Lenin, called their “state of household slavery” (https://www.marxists.org/archive/lenin/works/1919/sep/23a.htm) was a declared aim of the new Soviet state. But women’s emancipation was not viewed as a goal in itself. It had an economic and political purpose – to draw women into the labor force so they could contribute to the industrialization drive, and to induct them into Soviet public life, turning them from “kitchen slaves” into Soviet citizens.  What Lenin called “exceptionally petty” domestic labor such as cooking was to be socialized in public institutions (https://www.marxists.org/archive/lenin/works/1919/sep/23a.htm). This ambition is perfectly illustrated by the 1931 Soviet poster “Down with Kitchen Slavery!  Yes to a new way of life!” 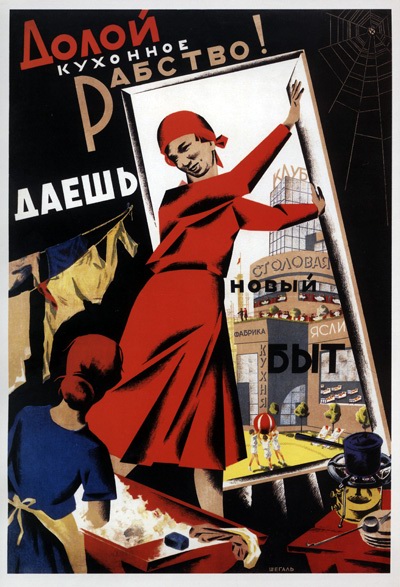 The “enslaved” woman of the past is pictured in a cramped, dark private kitchen, forced to wash clothes by hand and use a tiny stove. A woman worker opens a door to a vision of the socialist future featuring a bright, airy factory, canteen, nursery and club. In the “new way of life” women would be able to participate in employment and public life, with domestic and caring labor performed by state institutions. Women did indeed join the labor force in successive waves so that by 1970 nearly 90 per cent of working age Soviet women were in full-time work or study.  But the ideal of socialized household labor never became a reality except in the sphere of childcare. Since the state made no effort to encourage men to perform “exceptionally petty” labor in the household – men were expected to devote themselves to what was perceived as more productive, industrial labor – women were left with a notorious “double burden” of full-time work and domestic labor which persisted until the end of the Soviet era and beyond.

My article with Olga Isupova focuses on how this legacy has impacted gender ideology; that is, women and men’s beliefs about how domestic and paid work should be configured. Despite high women’s employment during the Soviet era, three years after the collapse of the Soviet Union, in 1994, an international survey found nearly two thirds of Russian women and 70 per cent of men supported the statement “a man’s job is to earn money; a woman’s job is to look after the home and family” (International Social Survey Programme http://w.issp.org/menu-top/home/). We use data from 115 interviews with 23 young women who we followed between 1999 and 2010 to understand how such beliefs are sustained and how and when they are challenged.

We link gender ideology to the macro-environment of a society in relation to gender – what researchers call its “gender order” – and to the micro-level of interaction between men and women in which gender researchers argue individuals are constrained to “do gender” – that is, to demonstrate their masculinity or femininity through their behaviour (http://journals.sagepub.com/doi/pdf/10.1177/0891243287001002002). The Soviet gender order influenced gender ideologies in two important ways.  First, although the state promoted women’s employment it did not challenge traditional conceptions regarding gender and domestic labor. For example, a modified version of the male breadwinner norm persisted, with Soviet economic writings taking it for granted that wives should earn two-thirds of their husband’s wages (https://books.google.co.uk/books/about/Women_in_Soviet_Society.html?id=rtWfengNqQ8C&redir_esc=y). This reinforced the idea that domestic labor was women’s responsibility (even when Lenin was agitating for the socialization of domestic labor, he assumed women would staff the new institutions (https://www.marxists.org/archive/lenin/works/1919/sep/23a.htm). Second, the Soviet Union had comprehensive censorship and all forms of independent organization, including feminism, were banned. This made it hard for women to analyze their situation and question men’s domestic privilege. The difficulty is brilliantly captured in Natalya Baranskaya’s 1969 novella A Week Like Any Other (https://books.google.co.uk/books?id=JXZvMAEACAAJ&dq=Baranskaya+a+week+like+any+other&hl=en&sa=X&ved=0ahUKEwitm4vk8pzbAhXjCcAKHQyyBfsQ6AEIJzAA), which depicted the struggles of a full-time Soviet working mother who performed all the housework even though she and her husband were both scientists. The heroine is portrayed as exhausted, unhappy and perplexed, but rather than critiquing the gender inequity that leaves her so burdened, she blames herself asking, “What is the matter with me?” Attempts to live up to the ideal of the Soviet superwoman perfectly balancing work, motherhood and household management left many women asking the same question.

In the post-Soviet era, the relaxation of censorship and increased freedom to organize has made it easier for women to access alternative ideas and question traditional gender relations. Nevertheless, nearly a decade after the Soviet collapse, some young women in our study were unable to imagine egalitarian gender relations despite being fiercely critical of the “kitchen slavery” faced by their mothers. It should also be noted that freedom of association and information are again under threat in Russia today under Vladimir Putin, though the impact of this on the gender division of domestic labor is still unclear.

As well as being institutionalized within the gender order, traditional or egalitarian ideas are enforced (or not) in the everyday interactions of men and women. Women themselves can reinforce traditionalism when they expect men to perform as breadwinners. We found that the ideal of the male breadwinner was an important prop to traditionalism, with traditional women using men’s superior wages to explain why housework was a woman’s responsibility even when both partners worked full time. But some women in our study also became more egalitarian, and we found that this was easier after they met supportive men with whom they could imagine an egalitarian relationship. Individuals’ gender ideologies are therefore shaped both by dominant ideas within the gender order and by interaction, with the two influencing each other.

We saw quite significant change during the 10 years of our study, with some women moving towards egalitarianism and others, though self-identified as heterosexual, giving up on men and embracing what we called an “ideology of independence”. Although the second position gave women facing difficult challenges a sense of agency and dignity, it left men unchanged and free from domestic and caring responsibilities, a dynamic which is sensitively analyzed in Jennifer Utrata’s book on Russia’s lone mothers (http://www.cornellpress.cornell.edu/book/?GCOI=80140100573890). The ideology of independence is the necessary shadow of male breadwinner ideal, and has provided a safety valve for gender traditionalism.

The struggle between gender traditionalism and egalitarianism continues globally. We think situating gender ideology in the context of particular gender orders and relating this to the everyday micro-interactions of men and women aids our understanding of how this dynamic unfolds in different contexts.

Sarah Ashwin is a professor of industrial relations in the Department of Management at the London School of Economics. Her recent publications develop different aspects of gender theory by interrogating Russia’s stalled gender revolution.